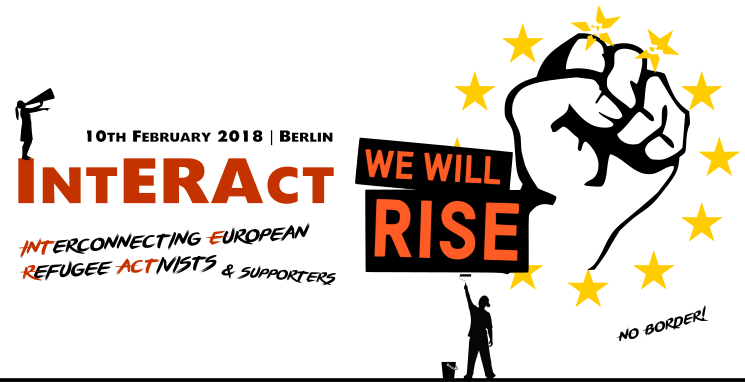 Workshop 1: Immigration law: Curse or Blessing?
One important current debate in German politics is, whether an immigration law, which is not existing yet, is needed or not. What does an immigration law mean for migrant and refugee communities in Germany? Does an immigration law steer toward enforcing assimilation in the majority society and freezing the idea of “integration” as a one-way street? Or does it rather provide new opportunities and chances to redistribute power and resources? And how has the law to be built to leave room for maneuver for people with migrant and/or refugee experiences (participation, power distribution, resources, same eye-level, empowerment) Which experiences exist from other countries?
Input: t.b.a.

Workshop 2: Economic Partnership Agreements: Colonial continuity in 21th century?
In Germany the heated public debate about TTIP disguised the closure of the EPAs between the European Union and the three African Regional Economic Communities. In this workshop we like to draw the attention to the consequences of those EPAS for the local communities and whether they are pushing factors for migrants and refugees to leave their communities: Who is interested in the signing of the agreements and who benefits from the agreements? Why are activists blaming the EPAS as colonial continuity? And, from southern global perspectives, which alternative ideas and resistance networks against the EPAS are existing?
Input by: Adam Bahar

Workshop 4.: Refugee issues in the EU: Common strategies or back to individual nationalized politics
In the last three years the EU was not able to find common solutions and strategies for the refugee issues as some of the member states did not fulfill the expectations, e.g. related to the distribution of refugees to the different member states. It shows the crisis of the EU and leads to the question if there is a common European perspective and strategy in refugee and migrant issues or if the individual nationalized politics are the future “solutions”. How are common European or nationalized politics influencing the situation of migrants and refugees? And which different perspectives of resistance we have?
Input by: Watch the med / alarmphone

Workshop 5: Violence against migrants and refugees
During the peak of migration in 2015 nationalist and fascist movements all over Europe strengthened. At this point of time it can not be foreseen how long this development will last since nationalist parties gain strength in various parliaments. Besides political movements there were militant groups raging against migrants and refugees. This escalated in several attacks on refugee camps in late 2015. How can this violence be seen in the context of nationalist groups organizing in Germany? Have there been similar incidents in other European countries? And how is this violence seen by the media and the public?
Input by: Reach out

Workshop 1: self organisation structures and solidarity in political struggles
Refugees and migrants show a strong capacity and power to organize themselves and raise their voice not only in the streets and have done so for at least 20 years.They have been fighting using different forms of resistance for example demonstrations, hunger-strikes, protest marches and even squats for the right to be equal parts of the society. In this workshop we aim to explore diverse forms of struggles, visible and invisible, and protests against exclusion, violence and discrimination. By sharing migrants and refugees ideas and experience of self-organisation and success we can discuss how solidarity between refugees and non refugees can work.
Input by: we born free radio (bino)

Workshop 2 : Refugee self organisation in times of rising right wing mobilisation in Europe
During the last years several European countries have established aggressive changes in asylum laws, administrative procedures and border control. At the same time right wing activists startet mass mobilisation against refugees and migrants and the violence against people of colour rose. How did this influence the situation of migrant self-organisation? How do affected activists see this movement? We need to discuss this questions together with activists of self-organisation of refugees and migrants.
Input by: International women space


Workshop 3 : The relation between welcoming culture and self organisation
In oppose to strong right wing campaigns other parts of civil society have developed some sort of “welcoming culture” to support migrants and refugees during integration processes.These groups and organisations were often started by actors coming from the countries mainstream society. Especially in Germany there has been a lot of institutional support for this sort of commitment. But is this a good alternative to self-organisation of refugees? Is a productive cooperation between groups of self-organisation and “welcoming culture” even possible or are these conflictive approaches?
Input by: Moabit hilft

Workshop 4: Approaches to foster exchange by sharing refugee perspectives
Besides a lot of self-organisations supporting refugees and migrants deal with institutional problems and integration there has always been groups and initiatives striving to start an equal dialogue between members of their and the receiving culture. There is lots of creative ways and strategies to deal with cultural differences e.g. theatre plays, school seminars, making youtube videos, cooking events or getting in touch with your neighbours. What are different approaches to foster exchange between refugees and members of the mainstream society?
Input by: life back home-Project

Workshop 5: Approaches on women empowerment and their rights
During this workshop, we will highlight the increasing awareness of women and gender and how to find ways to help women from other countries come to Germany to know their rights and freedoms, and how to choose, live and do what they want. To integrate women into society and to make them play an active role in the society.
Input by: trixiewiz e.V.

Workshop 6: Empowerment and community self-organisation
Community empowerment, is more than the involvement, participation or engagement of communities and structure structure which already exists. It implies community ownership and action that explicitly aims at social and political change. Community empowerment is a process of re-negotiating power in order to gain more control. It recognizes that if some people are going to be empowered, then others will be sharing their existing power and giving some of it up .Power is a central concept in community empowerment and health promotion invariably operates within the arena of a power struggle.
How is that work in reality? we need to discuss the topic with self organization of migration and their role in empower community.
Input by: trixiewiz e.V., Jugendliche ohne Grenzen