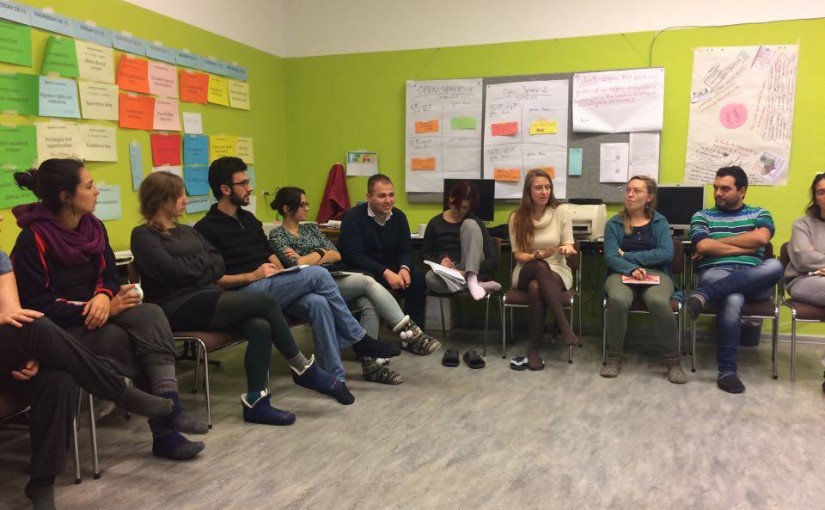 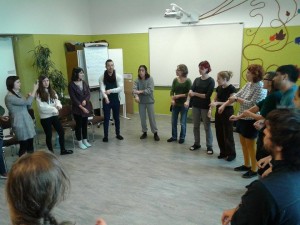 On 7th day of the Training course “Dealing with migration” we had three workshops on the topics perspectives of people of color and on responsibility. They were designed to offer a different perspective for analyzing white privileges and discuss case studies related to the 21st century colonialism and its effects (inequality in wealth distribution, migration and internal displacement of people).  These topics were already introduced in the previous days.

Critical whiteness workshop
“We’ve been robbed from our humanity”.

The workshop was conducted by Lawrence Nana Yaw, freelancer and facilitator in activities using the critical whiteness method. After introducing himself, he distributed to all participants a worksheet with four questions:

In explaining the method, the facilitator projected Jane Elliott’s appearance of Oprah’s show in 1992, in which she applies methods of critical whiteness to the participants of the show and indicated there are 4 stages that are to be identified in exploring this method: denial, shame or guilt, recognition and healing. These steps are a cycle and a continuous struggle with your own personal identity.

Critical whiteness methods are means to provoke people to discuss and confront with whiteness and white identity. Their goal is to “helping students come to a critical awareness of the history of whiteness”, “to understand the material effects of white privilege”, to understand the power of white discourse in history and education and to “help students form a positive, anti-racist white identity” (Nichols 2010, 4-5).

In our workshop, the method raise confusion and controversy among the participants, as they became antagonized on the outcomes of the workshop.
While some appreciated being confronted with questions related to their identity and the history they knew, others felt the method is aggressive and can lead to communication barriers between the participants and the facilitator.

Therefore, we recommend attention to the following aspects:

– while the method is designed to get participants out of their comfort zone to think critically of their identity, the facilitator must pay attention that participants don’t disengage from the discussion without a wish to return.
– the method should not be implemented by a facilitator which has built a deep trust line with the participants, if this line is important for his future presence and work in the community.

– the method should be evaluated at the end of the workshop, especially when it is implemented with trainers which will replicate it in their respective communities.

Our second workshop on responsibility was called the Reverse of wealth. Firstly we were divided in six groups and were assigned to watch video, analyze it and later present it to our fellow participants. We analyzed six case studies on coltan mining in D.R. Congo, free trade agreements, climate refugees, Niger delta oil industry (Shell), child labor on cocoa farms in Burkina Faso and land grabbing in Africa.

We had a task to look closely on a certain questions while providing descriptions and making conclusions. The questions were following:
1. Give a short description (key words) of the phenomena?
2. In how far the “Global North” is responsible for this situation?
3. How the phenomena/situation is connected to migration phenomena?

We should take the responsibility, not to support these exploitation and stop buying the products. The “Global North” creates inequality, poverty, hierarchical power structures, human rights violations and aggressive approach in “Global South” and thus should take responsibility for creating this kind of situations. We also agreed that there is a large hypocrisy of the governments that turn a blind eye and support companies and corporations of the “Global North” that actually enjoy great benefits of this exploitation.

We also concluded that there is lack of investments in disaster prevention and preparedness.

Game that shows in interesting way how little we know and how we look at the world.
There were five continents and three information that participants should have guessed about population, GDP and number of refugees. Based on their guesses people stood on piece of paper with name of continent. They were faced with actual number and they were able to compare.

We used chairs to show distribution of wealth (GDP). Each person sits on its own chair and with it it is on a continent, then they leave chairs were they choose and moved to another continent if results are different according to the real numbers. 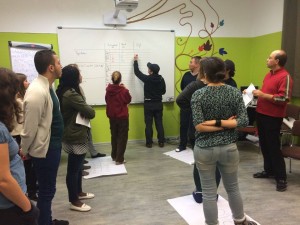 Results – For population answers were a lot different than reality, two or three difference then in reality, for GDP similar happened but with a bit less difference and for number of refugees on every continent results were rather accurate.

Discussion – Method can be adopted on countries or regions for distribution and other indicators. Negotiation process was a challenge for participants but overall it was a success.