Topic & Content: I have chosen to carry out a project which is tied to LGBT+ history for two reasons. First of all, by volunteering at LGL (Lithuanian Gay League), I will be able to organize an event at LGL (an agreement with local partner) premises and naturally attract attention of those who are interested in LGBT+ rights/history. Secondly, I’m highly motivated to extend  my historical knowledge of the field in order to improve as an activist. It is also important to mention that the project is still in the „idea phase“ and any comments/ideas are more than welcomed.

Usually the Gay Liberation Movement and Stonewall Riots are acknowldeged as beginning of LGBT+ movement. For this reason, an important period which started in U.S in 50‘s is often forgotten. The Lavender Scare was the persecution of homosexuals in the 50‘s and 60‘s, basically it paralleled the anti-communist campaign and gay men and gay women were thought to be communist sympathizers. It mainly resulted as mass firings from the US government workforce. 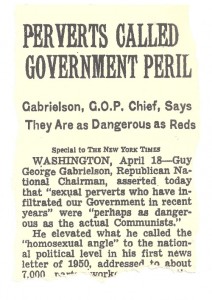 I‘m thinking of gathering some controversial (?) /thought evoking material from various sources and setting up a comics workshop. There are numerous books published on the topic as well as video material and hopefully I‘ll be able to get an access to that. After sorting out historical material, I‘d organize a workshop event at LGL in which I‘d be able to present the material. Even though The Lavender Scare mainly resulted with firings from government workforce, I believe this story to have relevance in present:

Also, I‘m thinking of including some examples from my own viewpoint in order to inspire/set an example for participants since I‘m a bit afraid they can show lack of interest.

in the 50‘s adversaries of the medium had turned their sights on Batman and Robin – opponents assumed that this crime-fighting duo were „homosexual lovers“, basically any mention of LGBT culture was forbidden until 1989. 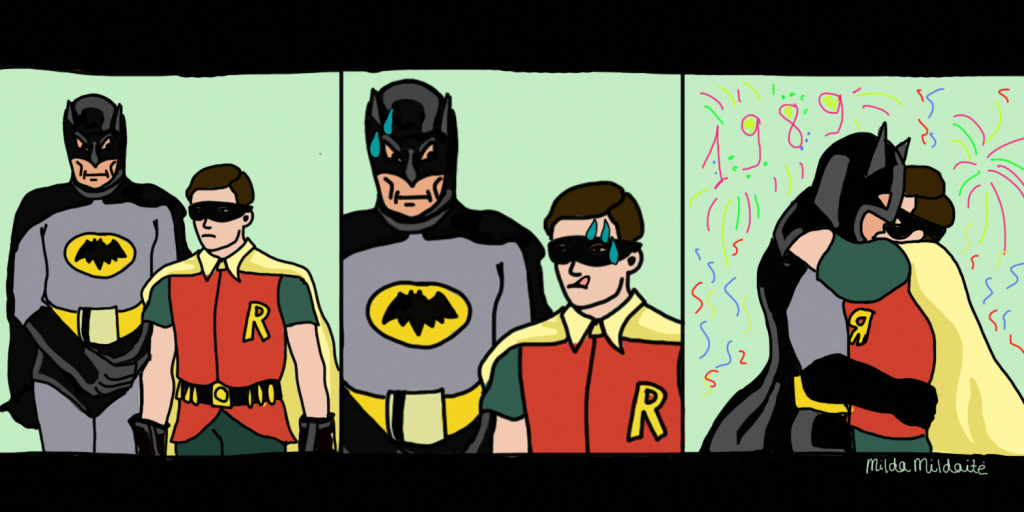 Overall outcome would depend on the shown interest from the community. Usually such workshops gathers quite the attention. Ideally, after the workshop, I‘d be able to make a zine as a final outcome. This can also be a motivational aspect for participants.

I also thought about starting a discussion on wether the covered period had any influence on our country. Yet the workshop itself would take up some time and I’m not sure if it’s a good idea to load even more activities on participants. Maybe suggesting to do a comic on the question would be a better idea and a great workshop startint point. (?)

Target groups. Even though events at LGL are open for everyone, I consider my target group to be other volunteers and local LGBT+ community.

Evaluation. I don‘t have a clear idea about the evaluation from participants yet. I liked the “suitcase, question mark, garbage bin” method from Antonia‘s project, maybe I could use this method, maybe I‘ll come up with something else later.

As for my own evaluation, if I‘ll be able to capture participants attention and inspire them to come up with enough material to put up a zine, I‘ll consider my work done well.

May- June. Gathering and organising the information. Doing more comics work as an example.

End of July- beginning of August. I‘d like to carry out the workshop between 25of July – 10 of August. This way, I‘ll have plenty of time for preparing the information and choosing the best date available. A few weeks before the workshop, I‘ll make a public facebook event.

End of August. Putting up and printing out the final zines.

One thought on “Tying Cold War and LGBT+ history”