The biggest issue for me,  on this day and in the whole training, was the introduction to an input on “The West and the Rest”. I appreciated the input and the attempt to show how categories like “East”, “West”, “European”, and “Oriental” can be deconstructed by looking at the time and place of their creation, and at politically motivated instrumentalization.

What made me feel very uncomfortable was to see this important topic being introduced with the attempt to reproduce stereotypes about “East” and “West” and they way this was conducted:
Refusals to play along were repeatedly rejected and disencouraged by the moderator as well as by parts of the group, which I find to be a disastrous way of dealing with stereotypes. This does not mean that I deny the existence of stereotypes, of course they exist, and are stuck in everybody’s heads, as one person pointed out. In order to make them productive though, it has to be allowed to openly reject them, and express inability to reproduce them (especially when placing random adjectives in either “West” or “East”, without those being further defined. Eastern Germany? Eastern Europe? Eastern Romania? The “global” East?). Otherwise, if the mere fact of their existence defies every attempt at deconstruction, why mention them at all?
It has to be possible to have a proper discussion about both result of the method and the method itself, both of which did only happen in a small circle after the session when lunch was already being served.
I am aware that most people had no problem with this activity though, and that it is probably my “academic bias”, which dreads nothing so much as oversimplification. It is also clear that the group was so mixed that it was difficult to reach and satisfy everyone. Yet, this is place for reflection and further thoughts – so here it goes.

This whole thing left me pondering the question of how to deal with (national) stereotypes in education: Is it okay to invoke them, especially in a multi-national group? How to deal with people who actively reject them? For me, these issues are as central and deserve the same attention as the handling of gender stereotypes. Dealing with them insensitively might cause a lot of damage within a (multi-national) group and cause individuals to feel uncomfortable voicing their opinion.
Furthermore, if we accept the potentially harmful nature of this kind of stereotypes, why not try and act against them? Why not explicitly open a discussion about what makes them so persistent, and about the different functions they have on an individual, social, and political level? I did not attend the Anti-Bias-Workshop, but am generally fond of the idea of creating awareness about personal prejudice and patterns of thinking. Why not create a space in which national or ethnic stereotypes, when they come up, are either immediately discussed or at least made visible, not to shun the individual person but to be able to recognize biases?

During the last feedback round, one participant stated that for her it was rewarding, to meet so many people from Romania, because in the country she comes from, the stereotypical Romanian is a beggar. While this statement is of course potentially hurtful, it also allows many important questions to be reflected upon by everyone in the group individually: Do I feel personally offended by this statement (or not), and why (not)? Do I feel the same as this participant? Did I realize I felt the same before she said it? Would I have dared to say it? Did I suspect that’s what people in this participants country think?
And then, on a more general level: What are the reasons she had this stereotype? In which political/cultural/social/… context was it constructed? And so the deconstruction goes…

To sum it up, this day certainly gave me food for thought. And it convinced me even further that national stereotypes, as well as old tropes about “The West and the Rest”, are still among the most pressing issues to deal with on a European as well as on a global scale.

The first performance,  which was about Romania and West, was amazing.Comparisons,which Marina(the member of our group and teacher in this topic) made using different tools like pictures,discussions and games were ideal for me.As for me, the game,when we were writing one  world per person after that  mixing all words together  and at the end every person took randomly one of words and said to which part of Europe(East-West) he/she related this words.This game was more than perfect, because it included at the same time stereotypes,different points of viewes on the same topic and helped us to impove,showing the results in the end.
During evening we had a good tour in some regions on West-Berlin.Firstly,I was very surprised when we were able to see the place,where Kennedy took his famous speech  with words”Ich bin ein Berliner”. 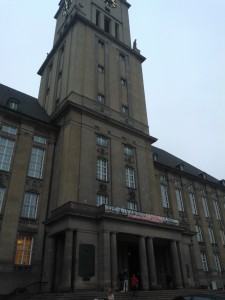 For me this place historical and it was a great idea to visit it.The line during the hole tour was clear.Our guid was answering all questions and also it was amazing,that she has own opinion to this being part of West-Germany.
Maybe I’ll more interesting to listen more about our last station at the church,rather that stay for too long at the Poztdamer Platz because after 5 minutes for me was very difficalt to concentrate because of bright  lights  and the noize from shops.But all in all tour  was full of useful information like story of the West radiostations and ordinary life,which made the tour cognitive. 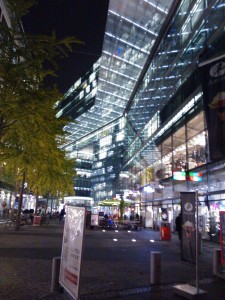 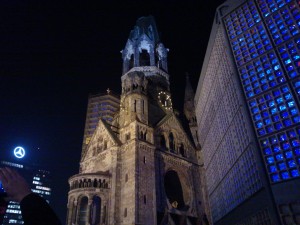 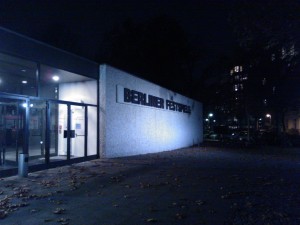 A day started with a reference to former exercise anti-bias workshop. The woman, who presented Romania’s situation and stereotypes, also encouraged to think about the stereotypes in our native countries and differences between east and west in general. I was not surprised that a few times opinions about a stereotypes diversed as a adjective ‘diverse’ was the main word applying to both sides. This was a well planned educational method that proves there is not such a big difference between east and west Europe.
In the afternoon we had a guided tour through west Berlin. It was good to see and compare it with eastern part of the city because so far the whole training was based on east Berlin. Unfortunately, because of th very huge quantity of information i was not able to remember the details of the story told by the guide.

A: Romania & The West: Deconstructing identities

C: Reflection of the West Perspectives