The participants are asked to take certain roles. If the topic is discrimination, this could for example be:

At least two participants need to be ‘external observers’.

Frozen image: expression by body position, without dialogue or movement.

Step one: the tension situation

Step three: analysis of the situation

Participants are asked to reflect on what they felt, what their thoughts were, what underlaying dynamics might have been in this situation and how this all relates to discrimination and the resolution of discrimination.

An additional question for the observers during the frozen image might be:

– How about power dynamics? Who do you think is dominating and why?

During our try-out, the person who was embodying the discriminated person noticed that (as a white male) it was difficult for him to ‘get into the role’ of a person that experiences discrimination. We then asked someone who is actually repeatedly confronted with discrimination (a non-white female) to ‘sculpt’ the person in a body position that would reflect her experience and then asked the sculpted person to finish the phrase ‘How I feel right now is…’

To experience empowering, we then asked the white male person to sculpt the non-white female person into a body position that would reflect his experience and asked her to finish the phrase ‘How I feel right now is…’

Benefits of this method

Some of the benefits of this particular method mentioned by the participants were:

Risks of this method

Embodied work can be a very powerful method, so it also needs awareness of the risks and some precautions. Taking the time to build a safe container for this exercize is crucial.

Thoughts of participants about this method 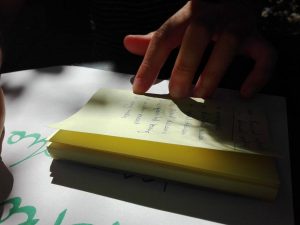 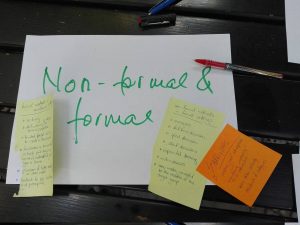 Until now my project is nothing but a theoretical idea and maybe the implementation will be not that easy in the end. Here you can read my first ideas about it. Maybe I will also change the topic or focus during the working process (for example I could imagine a shift from focussing on the cold war era to East – West stereotypes or something totally different).

I’m glad for any kind of feedback and helpful ideas!

To deal with history and especially the history of Eastern and Western Germany (and the whole world that was shaped by the iron curtain) is probably an easy thing to do in Berlin. But what about a small village in the South West of Germany that is on the one hand not that old itself and on the other hand there are no visible signs of remembrance or even traces of a former separated world and society? This is the starting point for my little project.

My mother and one of my brothers are living in a village called Friedrichstal (it’s close to Karlsruhe in Baden-Württemberg). This village has around 5000 inhabitants and was founded at the end of the 17th century by refugees that were driven out of France, Belgium and Switzerland because of religious reasons. Nowadays this village is a quite sleepy one: there is a school, a football and sports club (and probably some more clubs), a protestant and a catholic church, a stop for the tram to the next town, even a station for the regional train, a small industrial zone. So nothing really special. No lovely old village center – instead of this the biggest parts are single family houses starting from the ’60s including a growing larger settlement of family houses that are built within the last years. Most of the people are working outside of Friedrichstal.

So how it’s possible to implement a project about the time of the iron curtain and its consequences in such a surrounding? This is the challenge I would like to take up.

Together with a friend my brother is leading a children group. The kids are at the age of around ten up to twelve years and they are meeting each Friday. This offer is connected to the youth work of the local catholic parish but in reality they never really spend time on religious or spiritual contents, it’s more about playing group games and offering outside activities – so it can be seen more as a part of the local youth welfare work (at least in the group of my brother and his friend).

I decided to take this group of children as the target group of my little project because I can have quite easy access to this group of kids through my brother.

* evoking interest in and curiosity for history

* action research → there are no “natural” places that are depicting symbols for the cold war era, but I will spread some material at several places (maybe five) in the village where the kids can get information or impressions (so it’s a bit more like a treasure hunt) and in the end they are sharing what they have seen/heard/read/thought

* contemporary witness (living library)→ if possible I would like to provide one station with a person that experienced the GDR (maybe my mother could do this) and that could tell some personal impressions and stories; if not possible I would use some audio material

I’m open for ideas/suggestions/hints for material that I could use for this kind of setting (what means: no actual places of remembrance, so that I have to

The evaluation I will separate in two parts: On the one hand I want the kids to give me a anonymous feedback. For this I’m planning to use the method “suitcase, question mark, garbage bin”. This means that in the end of the project the kids will have the possibility to write or draw on different coloured papers what they have learned tod

ay (suitcase), which questions they still have in mind (question mark) and what they didn’t like or what was unnecessary in their opinion (garbage bin). If possible I will try to answer the written questions in the final circle.

On the other hand I want to do a reflection on my own acting and how the project was working. For this I don’t have yet a good idea for a useful method. Any suggestions?

My local partner for this project is my brother and his friend who are leading this youth group together.

* May → looking for useful material

* beginning of June → preparation of the single stations of the action research (incl the material, the questionnaires for the groups)

* one week before the project: introducing myself and informing the kids that there will be a special offer next week

* after the project: self-evaluation