I cannot think at something more relevant than University Square , Bucharest, when talking about culture of remembrance in Romania.

University square is that place, or rather space, that encircles, in post-communism history, all the major democratic events beginning with the ’89 revolution and ,hopefully not, finishing with last year’s protests regarding Rosia Montana mining project. Here people had shouted, had sung, had laughed, got beaten, had died. Crosses and plaques mark the place. During the year the image shifts from place of commerce (flower stands, flea market) to advertising holidays (Christmas or Easter decorations and market). And why it shouldn’t be like this?

Is the space of remembrance democratized or not?

Today we were talking about museufication.All topis was very interesting for me,because I belong to people,who visits museum,when looks for some information.Bacause in my opinion in museum you are also can get a presentation how objects/information are represented and look like referring to museum’s idea.
We were talking about 5 museum in small group,as well, and after that each group presented their work.It was not only reading something we alo had  long discussion about point of view in museums.Are they subjective or objective and mostly,unfortunately, are subjective.
It was very usefull input for me I understood  how I should anylayze museums’ subject using only discription by words and I sured that visiting of museums is a good point for right remembarence.

We were divided in small groups,as usual and I appreciate it a lot.The topic in our group was “propaganda”.Unfortunatelly,I can’t say that was really involved in the discussion-for some reason I fell myself uncomfortable.Anyway discussion was interesting,we had mostly the same points of viewes.We were talking about target group in age between 16-20 years old and how to teach those young people.
The obvious thing for all of us was that propaganda like phenomenon will never disappear.It will alvays exist,but in different ways.
After that we were going to two different places,which were interesting in other way.
The first one was the home of democracy and for me it was something new,because I have never faced with those organizations before.
The second place I love more,anyway.
For me it was a small excursion to other time ,what was unexpectable.I like his maner of speeking.For me it was great,thathis spoke in mother-tongue.I didn’t understand,but I fell his emotions,which is very important for understanding person’s relation.For me it was all in all great:atmosphere,place and the man,which talked with us

Something will happen in the future. That’s for sure. We won’t get to see what, we can only pretend to imagine a scenario or two or three or…

It was a good imagination exercise, where each had the chance to express what he dreams about.

The small group in which I was assigned came to a common agreement that technology will shape the minds of those who want to learn about the past. And the history is written by the winners, as we all well know. But what if there will be more versions to pick from? Each will tell a similar, but different story. Unless someone will hack the system and will let only one version exist. And then, what will the history look like?

Wouldn’t it be fun to see that it was forged, as it is today on so many events that took place?

When the days were cold and hard to endure, humor warmed up the lives of many.

” The presidential couple (from Romania) was traveling by helicopter towards Bucharest. The wife said :”Look Nick, what beautiful rivers we have…” . ”No, woman! (the president replyed). Those are highways…”. But the pilot, in his mind ”You idiots, those are ques…!”

One woman goes into a store. Surprised that she managed to get inside without waiting at an endless que, she starts looking around. Left. Right. Behind the cashier… Then she asks : ”You don’t have bread?” ” Nooo, here we don’t have eggs. In the shop next door they don’t have bread…”

Still, we should not ignore the reasons why life got to this kind of absurd moments… Briefly, most of the products were going towards export, in order to cover the debts the country accummulated in the previous 30 years (loans and war penalties towards USSR).  And while on paper the situation seemed balanced (there’s enough food for export and also for the population – *information that was regularly checked by field visits by the President), the reality was different. A lot different. And those who are to blame for the situation created in the 80s are still pulling the strings in our politics today.

Officialy, the external debt of Romania fully payed in the 80s was of about 21 billion US dollars. Paid with huge sacrifices by the population. But today, the debt has well passed 100 billion Euros… And is increassing, day by day. 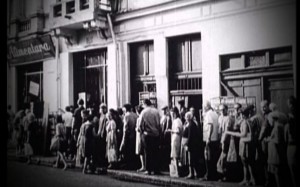 Reading about the WW2 german prisons, I had ‘high’ expectations from the former prison that we went to visit. Mostly reffering to the treatments applied and the ‘housing’ conditions. A huge change, a different approach, but still based on wrong and immoral reasons.

When it comes to the reason(s) why some get behind bars, how those moments change their whole existance, how it affects all around them like a domino game, at least let the man be guilty of something! Those who got there will forever hate the system. Or themselves.

All in all, a prison is a prison, and those who don’t belong them shouldn’t be there. That’s one reason why the changes that took place in Eastern Europe have made the world a bit better.

As usually our day started in the green room. The activity was dedicated to Romania and deconstructing of identities. I liked open discussion after the method and the way in how the women who gave the lecture communicated with auditory. For example, when we were on the Houses of democracy, I didn’t liked the way in which the guide communicated with us because of his posture and body language ( almost all the time he kept his hands crossed on his chest). Later we visited the West Berlin for the first time. We had the guided tour, I think it was great but it took too much time because in the end of the tour people were distracted. But it was worth to visit all the places because guide told us about the objects, gave us interesting details, showed pictures from West Berlin and her communication with us wasn’t constrained. It was really exciting method because we can not only see some details, buildings in photos but also to compare the way in which that was changed or not changed till nowadays.

In my life I’ve visited only two prisons: 1st was few years ago, a present juvenile portuguese prison and the 2nd, few days ago, a former political prison from Berlin. Both visits reveled me important aspects, but now I will reffer more to the last one.

When I found out that we will visit a former Stazi prison, from GDR, I wasn’t sure what to expect. In fact, I didn’t have any expectations. I was just there, after a long (and nice) walk, for an official guided tour of the place.
What I would like to talk about is something that was totally present in my mind during the tour, which I think it’s an important point of reflection.

I am from Romania and I was 6 when the communist regime fell. Almost all my memories about that period are from books, collective – oral stories, TV shows or individual narratives. On the specific topic of the political imprisoning I mainly know stories from books. In Romanian literature there are lots of memorials of the attrocities that happend during the communist regime, inside these abominable places. When I was 16 I remember I was crying while reading a book of a former political prisoner and I couldn’t believe that people can be so cruel to each other and that those horrible horrible thigs were happening so close to me, in the very palpable, touchable ground of Romania, not so many years ago in the century I was born.

During the trip through Hohenschönhausen prison I had this very specific thought that “In Romania was way worse” and I couldn’t stop thinking about it. Random facts and tortures from the books and stories I’ve heard all my life were appearing in my mind over and over again. You may say that is natural, lot of us were thinking about this – in our group discussion after the visit – I could observe that not only some of my colegues from Romania were thinking at the same, but also colegues from other places, as, for exemple, Lithuania.
Though, I can understand our reactions, one thing came in my mind after our reflection time, and that is that we should not compare sufferings.
From my point of view this is kind of, not only disrespectful, but dangerous also. People suffered more than we can imagine and I think that just one day without freedom can be devastating for a lifetime. We don’t talk anymore about freedom as a concept, but about brute reality, humiliation, torture, phisical and psychological pain. Sure we can see the differences between, but comparing the sufferences, when we are in a place where there was so much of it and taking it so easily after we just went there, for me it’s like saying that a very awfull ilness is better than another horrible ilness, after both pacients died.
So, my proposal is simple: whenever we encounter this kind of situations, just take some time of real and empathic reflection, and understand the mutuality and the “universality” of suffering, in this case of imprisoning, in other cases of war, social bias and so on. This humanistic perspective is important for me not only in the metter of remembrance approaches, but also for the present and the days to come.

A day started with a reference to former exercise anti-bias workshop. The woman, who presented Romania’s situation and stereotypes, also encouraged to think about the stereotypes in our native countries and differences between east and west in general. I was not surprised that a few times opinions about a stereotypes diversed as a adjective ‘diverse’ was the main word applying to both sides. This was a well planned educational method that proves there is not such a big difference between east and west Europe.
In the afternoon we had a guided tour through west Berlin. It was good to see and compare it with eastern part of the city because so far the whole training was based on east Berlin. Unfortunately, because of th very huge quantity of information i was not able to remember the details of the story told by the guide.

A: Nai Wen’s input was extremely valuable, as it both offered  a video material that very thoughtfully gave voice to non-hegemonic perspectives about the fall of the Wall in 1989 and an explicit account of the “We are the play” project. I would like to try out invisible theatre as a method for encouraging people to remember and communicate memories about a political event. Before realizing that the men and women initially generating rememberance are actors, people would connect to the memory and verbalize it.