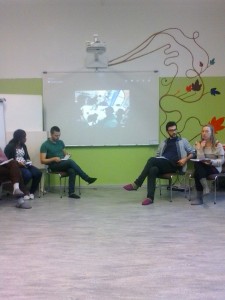 hursday morning was rather like an extension of the previous day, where we had the opportunity to present to the other groups all the interesting facts that we came to meet during our “on field research”. Apart from getting to understand how different entities can contribute and organize themselves in offering help and support migrants and refugees, we also experienced different methods of expressing and transmitting information. Some of us presented the information using photos or even videos, others through short plays or happenings and artistic interventions that were meant to involve us in the experiential learning process, by helping us understand better how they experienced their own encounters with social workers, NGOs, the church or artists.

After a short pause, we then continued with a new activity, dealing with migration rights and institutions. Each of us was asked to contribute in creating a kind of glossary of concepts that are related to these topics. We were then divided again into smaller groups, each of us focusing on three of the most relevant terms that we further researched upon. Unfortunately, because the first activity in the morning took longer than scheduled, we only had time to present one of the concepts to the group but still, our research was available for those interested and we also prolonged the discussion individually during lunch time. 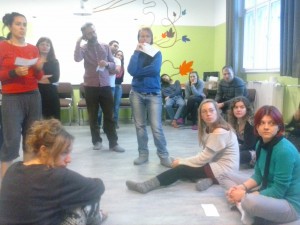 This game was our chance to see how different identities have or don’t have different opportunities in life. As a relatively homogenous group, we were each given a role card we tried to identify with. One person was a 50 year old homeless German; another a lesbian student, daughter of a Tunisian immigrant etc. The characters varied in age, gender, age, origin, residence, class etc. Our trainers asked questions such as ‘Can you vote? And ‘Can you buy your own house?’ And we stepped forward if we thought our character would say ‘yes’: the rest stayed behind. Soon the whole group spread out across the classroom with some people in the lead, some in the far back. It was a small scale visual representation of social stratification. A very interesting discussion followed on what made certain people stand where they did. This can be quite eye opening for people who never questioned their privileges of things we often take for granted.

Improvements: this exercise works better if done outside, and/or possibly on a large and long staircase. The list of questions should be quite extensive in order to cover as many aspects of life as possible. 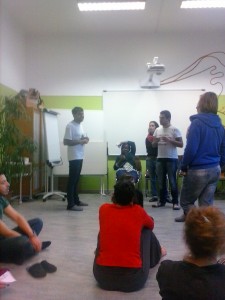 Variations: Participants who answer ‘no’ can also step back, which would make the distance between positions even more powerful. The exercise can also be done with the participants’ real identities, if the group is more heterogeneous, or the questions can be adapted for the group.

Challenges: The discussion can get quite heated, so the facilitator has to be a powerful presence that guides the conversation. The difference in opinion can lead to conflicts, so it is advisable to do it with a group that already created a safe space for all members. The participants might move in such a way that reinforces existing stereotypes, so the critical reflection of the group should be done cautiously, taking the participants’ experience and age into account in order to avoid personal attacks.

This game was an unexpected surprise, starting as a normal card game, becoming purposely confusing and then coming to an interesting ending conclusion.  The fact that the card rules were different at each table, and people losing or winning moving up or down table numbers, showed an interesting dynamic on how the phenomena of social and cultural mobility functions in our society.

Another interesting aspect of the game was the fact that the ones at table number one, thus the ones at the top of the pyramid, rarely moved down, or had any people coming to their table.  In our opinion, this showing the rigidness of perceived social mobility.

The cultural aspect showed the dynamics of integration and assimilation, every person arriving at a new table, with different rules than the table they started at or came from, trying to make sense of the confusion, the feelings of adaptability, being seen as the foreign ‘other’. 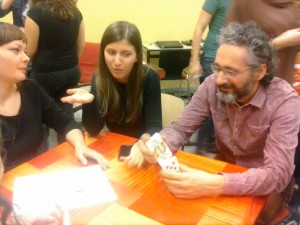 The organizers also played their role very well, in not dropping their ‘act’ and being genuine and very natural, thus making us be immersed in the whole process of witnessing in a firsthand matter, what it means to be the ‘other’.

One thought on “Migration & Identity”