Here are the rules of the game we played this Thursday.

Here is some video material Lawrence gave us as an addition to the critical whiteness workshop. 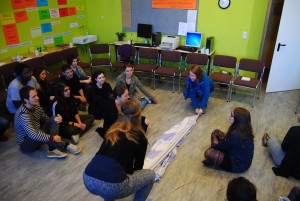 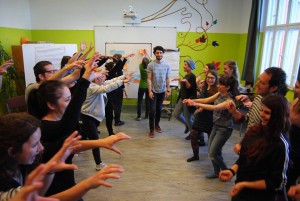 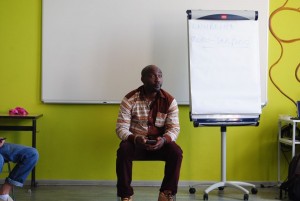 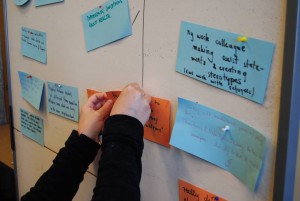 The seventh day of our workshop began with a fun energizer which involved a curtain and a fast response from the participants, which seemed still a bit sleepy, but all that changed rapidly.

We continued with a discussion about the difficulties that we have encountered while working with migrants in trans-cultural situations. As usual, we formed little groups and a lot of people mentioned the presence of certain stereotypes within the community of activists and professionals who work with migrants and refugees and pointed out to the fact that most of the times these processes happen without the individuals being aware of it. Discussions were made about the methodologies (eventual role-playing games/satirical theater and performances) that can be used in order to make this stereotyping more visible but no concrete conclusions were reached about the content of these methods.

It is important and funny to me to point out, that Leah arrived late again. 🙂 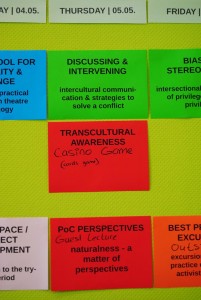 The day continued with a second energizer which turned out to be also quite fun but ironically a bit stereotypical (as we will now see in its description). It resembled a collective game of rock-paper-scissors in which our lovely group was divided in two teams and the participants could choose between three categories of characters – a dragon, a prince and a princess. The dragon “took” the princess, the prince “took” the dragon and the princess “took” the prince. After a few rounds, the superiority of the second team (of which this humble reporter made part of) became apparent, but in the end the game finished in a draw, as not to offend the first team.

A talk about stereotyping followed in different groups, mine dealt with gender stereotypes and the role of the parents, as a lot of kids seem to be raised with certain prejudicial concepts and the importance of work with children was stressed out. We talked about how society has shaped and is still shaping the gender roles and basic construct of our identity. As an example was given the idea that women should be soft and friendly and how frustrating and dis-empowering this can be. How are women supposed to react in the face of this macho attitude? And how can we, as men, should act in order to acquire and spread awareness of these problems? How can we break this macho view of gender roles? Some suggestions pointed out towards direct communication and exampled behavior. It was noted that men do not talk about these topics amongst each other and that people in general tend to blame society and its structures and not take personal responsibility. Pop culture has a great role in perpetuating the gender roles.

Another group discussed the stereotypes associated with the migration culture and methods of dismantling them. It was pointed out that is important to get to know the different cultural backgrounds of the migrants in order to avoid prejudices and that more activities and interaction are needed between newcomers and the local populations (for example picnics, games, cooking) in order to bring these communities together. It was noted that migrants and refugees are perceived quite differently and the level of their acceptance within the local communities is different which leads to certain prejudices.

Another topic that was discussed was the question of how to deal with friends who have an opposite view on migrants – it was suggested that a level-headed and a reasonable conversation which takes into an example a particular case helps break down misunderstandings about migration.

The topic of body contact was also discussed, taking into an account the misunderstandings related to it – for example, the cheek kissing in many counties versus the handshake which is dominant in other places. These cultural differences about the body touch can lead to awkward and unpleasant situations (example: a Muslim man refusing to shake the hand of a woman/ too much of a body contact when one is not used to it) but it is important to understand that this should not be taken personally and this is where the by better understanding of different cultures comes in handy, as well as a good awareness of one’s own traditions and habits. Respect is always a very good stepping stone into any trans-cultural relationship.

The day followed with the controversial and emotionally charged lecture “P.O.C. Perspectives” given by Lawrence Oduro Sarpong from Ghana, which provoked a wide range of emotions and managed, to a certain degree, to divide the group in its reactions and opinion on the whole thing.

Mr. Sarpong expressed his opinions on the impact of what he called “White Club” on human history and the planet as a whole. It is quite difficult to describe objectively the whole discussion due to the fact that it was quite personal and intense, and each member of the group experienced it in a different matter.

I would describe his method as quite formal and conflictious with the conscious goal of provoking an emotional response from the participants. Vagueness and generalization while stirring the whole topic into a pre-determined direction are also ways in which, me personally, would use to paint his method.

As I do not feel capable (and it is already quite late) to objectively describe the workshop with Mr. Sarpong, I would let each member of our super cool group to make up her/his mind about the topic.

All is all, I would allow myself to say, that the day was full of surprises, emotions and fun activities that helped me (and others, I guess) to reflect and learn.

All the best to all and write your reports! 🙂